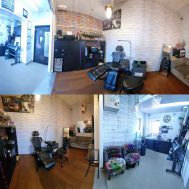 We are a friendly, family ran studio providing a personal service to all of our clients. Located on the 2nd floor of Active Fitness Club in wigmore we work with our clients to produce bespoke designs which evolve into unique tattoos.

We were previously based in stopley village for over 7years, due to landlords building on the site and wanting to have a serious lifestyle change we took the opportunity to move into the gym to concentrate on improving health and being able to have more flexibility with a very busy family 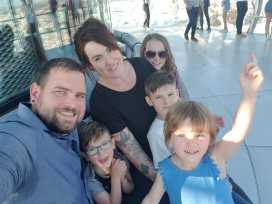 Where and why the shop:

Emma started this group after our Boy who was 8 at the time was diagnosed with Tourette Syndrome, amongst a few other thing.

Seeking advice and information we took to the internet especially Facebook. Alot of TS Facebook groups where based overseas, a lot of the information available wasn't relevant to the UK especially drugs and treatments. You'd find a small group in the UK but you wouldn't be approved to join as you lived in the wrong postcode. So the UK wide group was born. However over sea's member's are also welcome as they provide a contrast to our services. 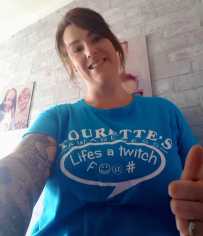 In 2017 I started printing my own uniform after a disappointing batch from my preveous supplier.

Emma used the equipment to make awareness t-shirts for Tourette's and Autism as we have always supported Ink4Autism these where brilliant and everyone loved them.

Early 2018 after a couple of years off going to various appointments with our boy. At these appointments there would be discussions with specialists talking about tics and co-morbid behaviours. During these appointments Emma would often say, but I do that, I did that, that's normal? So with a bit of reflection Emma then got seen herself and was shortly diagnosed with tourette's along with ocd and ADHD, this went with a previous diagnosis of Anxiety.

Late 2018 Our second boy was diagnosed Tourette's and waiting to be assessed for Autism. Our youngest daughter started ticcing.

All of these led to awareness t-shirts for All off the conditions that affected us our little family and more requested by individuals. 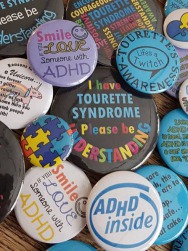 After making some tourette's awareness t-shirts for a lovely family, the lady that ordered the t-shirts asked if we did badges. The answer was no. She said if we ever did she would be interested for her boys lapel on his uniform.

This led to a weekend off Emma chewing my ear off about badges so I gave in and let her have the company card. A little later I get a email from one of my suppliers thanking me for my purchase of not 1 machine or 2 Machines but 3 cutters and presses.

So Emma's T-shirt ideas where transferred into badges along with lots of other Ideas. The joy of badges unlike the hoodies and t-shirts' are the are a lot easier to post.

We aim to spread as much awareness, as possible

Let's See What OiOiSausage comes up with next 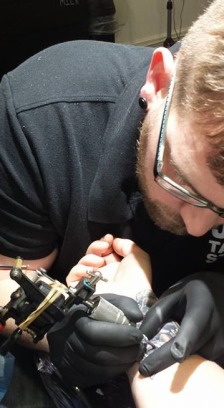 Curtis Campbell has had a number of different job roles and titles in his life. Along side these he has always maintained a passion for art and has explored many mediums. He has been designing tattoo's for friends since his teens. He has also been commissioned to make a number of one off pieces.

It wasn't until 2012 when he was designing yet another tattoo.. Alough this one was for himself, A cover up tattoo celebrate the birth of one of his children. His wife to be suggested that he should try tattooing for himself. So with that push he was soon on a intensive apprenticeship. Where he was taught all the essentials to start practicing the art of tattooing.

He started Tattooing in 2012 and with a number of happy practice subjects and then people asking for him to design and tattoo them. In Sepember 2013 he opened his own private tattoo studio to build and enhance his portfolio whilst still working full time. In keeping with what first made him want to tattoo, He named the studio using the initials of his children.
JCM tattoo studio.

In 2014 the business was getting busier and busier that it got slightly frustrating with his full time work. Something had to give!! So in Jan 2015 he found a new premisis bigger and better than the private studio. However it needed a lot of changes to be a servicable tattoo studio with the feel he desired. Over a couple of months he spent all the time he could doing up the new Studio.

Once the studio was up to scratch, that was it he quit his job and opened the doors and hasnt looked back!

Tattooing is a life style and it was crazy busy lifestyle with 4 children. It soon built into a routine of always doing the morning school runs with the younger two and finished work as much as possible to do the bedtime routine. However with the forced break that Covid19 provided and spending everyday with the family. When allowed to go back to work just the school runs and bedtimes didn't seem.to be enough. So after covid we started booking less hours and spreading the work out more and every 6weeks started taking a Saturday off. For a better work life balance.

In 2021 the work life balance was but the tattooist lifestyle (very sedate, lots of hours hunched over) it was definitely taking its toll physically. So in October 21 joined the Active Fitness Centre. This was great back and fitness improved. So the gym wouldn't interfere with the family or work. Gym sessions where at 6am in the morning to be back for school runs. This was great but exhausting.

2022 landlords at the stopsley studio planed to build a flat above the studio , this would have meant less floor space, two large windows bricked off for upstairs access so less light, no parking space and to top this off due to the cost off living increase and Morgage rate change the landlords also wanted more money for what would have turnt into a smaller darker shop with no parking.

The rather than seeing this as a negative we used this a opportunity to upsticks to a venue that would allow for the new fitter lifestyle without the sleep deprivation and silly early mornings.

So in June 2022 the gym tattoo studio was born. Well built literally we made the walls and extended onto a unused room within the gym. The space was made to match the floorspace that was used in the old studio. Whilst allowing easy access to the studio via a lift for when it needed for my existing clients with mobity requirements. 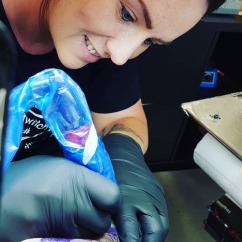 Emma Campbell is a very creative and freindly part time member of the team.  Is currently part time Emma is curently learning as much as possible about the art of tattooing has a keen interest in Calligraphy and Typography. and is always coming up with new project.

Her Alias of Oi Oi Sausage.

Take a look at the shop tab to see what she gets up to.

Get Social with Us.